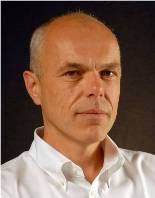 Jorn Eriksen (55), M.Sc.E.E, still married to the same wife, three children at 18, 21, 22. Became interested in electronics around age 4, stunned by the sound of a utility transformer and wondering what this was all about…now involved in multiple companies, focusing on making difference. Started out as a do-all product developer ending up as CTO at ASK AS (1986-2001), a pioneer in the projection industry. Co-founded projectiondesign in 2001, which was sold to Barco in 2013. Left Barco 2015 after successfully integrating projectiondesign into Barco.

The current market for head mounted VR glasses is dominated by products where the user looks directly onto one screen via a set of lenses. This concept has defined limitations to the FOV the user can experience at any one time. In other words, the user has to pan and tilt his/her head like pencil-beam radars to accumulate a visual impression of the world around. Even though motion sensors are getting better by the day and the computer processing power is continuously increasing, it is in the nature of this beast that the annoying latency cannot be totally avoided. The present technology will therefore continue to be a source for user discomfort, and sub-optimal user experience, for a long time to come.

One way to minimize these problems is to increase the resolution of the VR glasses and to increase the Field of View (FOV). The wider FOV the VR glasses can offer, the more of the world can be seen by just moving the eyeballs naturally. By avoiding the rapid head movements the user will have a much smoother and realistic experience and the less problematic the latency effect will be.

The paper will discuss the method used to achieve 200˚ HVOF and 43˚ VFOV using our patent pending collimation techniques. Pictures of the optical demonstrator and the first laboratory prototype will be presented alongside a 3D printout of the second prototype.

I will also present the P200M Team and Time Schedule, as well as when we are ready to take orders.