High Dynamic Range (HDR) is Coming, but How Will it Impact Your Business?

By now you have probably heard the buzz about high dynamic range, or HDR.  But you may also be wondering if this is something you need to know more about, how it might impact your business and when.  This article may help a little in answering these questions.

First of all, what is HDR?  In simple terms, most would agree that it is an expansion of the contrast of an image and the display coupled with a significant elevation of overall image brightness.  When done correctly, it means that the peak luminance of the display expands while the black level decreases SIMULTANEOUSLY.  The result is visible from across the room as the highlight areas of the picture are significantly brighter   while the black areas are darker – with details more visible within each of these regions of the scene. .

Some argue that an expansion of contrast in the dark regions for a more film look without an increase in the brightness of the display can also be considered high(er) dynamic range.  Even the experts don’t all agree on a definition yet.  Nor do they agree on how to specify it, but something in the range of 5,000:1 or 10,000:1 seems reasonable.  Most flat panel and projection displays have contrast in the 1,000:1 to 2000:1 range, so we are talking about a major increase in overall contrast. 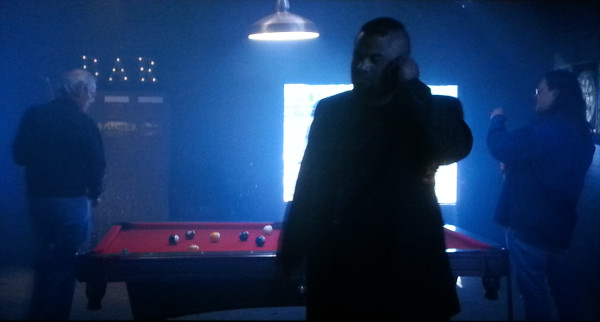 This photo, captured with an SDR camera, does not show the HDR effect, but in on a real Canon HDR display captured with a Canon camera, the black details and view out the window were both clear and sharp with no clipping.

But wait, some mainstream displays talk about 100K or 1 million to one contrast today.  That is a different kind of contrast.  In a projector with an iris, it is opened and shut on a scene basis over the whole image to decrease the light in dark scenes and increase it in bright scenes.  It is shifting the native contrast range, not expanding it.

In LCDs with direct backlights, there are zones that can be controlled individually.  For an HDR display, you need to have a lot of zones (probably hundreds) to provide enough spatial resolution in the dynamic dimming capability.  Many TVs have had this, and the new HDR TVs expand the number of zones while increasing the peak luminance from the 400-500 nits range to the 800-1000 nit range.

UHD -TVs with modest HDR capability will be in the market in 2015 and HDR content will be available from Netflix, Amazon, 21st Century Fox, Paramount, Vudu, M-Go and Samsung at a minimum, with more content expected.  The only real HDR projectors coming in 2015 that we are aware of now are very high end cinema versions such as will be used in the new Dolby cinema theaters and the new IMAX laser projectors.  If you are in the home theater market, HDR definitely needs to be on your radar and should be on your product offering list for this year.  There will be many questions to answer about the displays, content, content delivery, formats and cabling, etc.  It is time to be involved in seeking these answers.

And just as important as all the hardware and content is the room environment.  A recent study by RealD for cinemas have found that HDR projectors will be great in the theater, but even small level of stray light – either reflected from the auditorium, audience, or from ambient sources like the exit signs – can degrade the on-screen contrast considerably.

Displays are at the end of the HDR pipeline.  You need HDR content to feed the display.  Again, definitions of HDR are not set, but cameras that can capture more than about 14 f-stops of dynamic range should be able to deliver good HDR content.  Today, many cinema-grade and even some prosumer-grade cameras can capture this level of dynamic range.

But how the information is formatted for HDR is not yet standardized.  Outputting the RAW data is one way today, for example.  If you are a camera maker, you had better be thinking about HDR because it is here today and will expand across all product lines in the coming years, I suspect.  Canon and Sony have shown live HDR camera capture to an HDR monitor for on-set or other live production needs.  This is where the industry is going, so get onboard.

The production pipeline for HDR content must also change.  There are now new ways to encode the gray levels that better match human vision and that are pegged to absolute luminance levels (the PQ gamma curve standardized by SMPTE).  In production, 12 to 16-bit processing is generally going to be needed to handle this expanded dynamic range without getting banding artifacts.  Some grading and mastering tools exist today from several vendors, but there remains plenty of room for innovation and new providers in this space.

As Technicolor has stated, they plan to offer HDR content in good, better and best pipelines.  The good will automatically convert legacy standard dynamic range (SDR) content to HDR, while better will add more manual intervention in this process.  The best will start with native HDR content on new productions.  Philips recognizes that a large variety of displays will soon be available on the market, and is offering HDR technology that exactly matches HDR content to the specific capabilities of each of these displays.

Will content creators embrace HDR?  It is a new creative pallet so it will take time to understand the benefits and creative possibilities, as well as changes in production techniques, but the answer is yes.  As we have seen, the cameras are already capturing HDR content, so it is more of a decision to master and distribute in HDR.  Catalog content will also be upgraded to HDR.  M-Go, for example, says they will have dozens of HDR movies and TV shows at launch later in 2015.

The delivery pipeline is the other big piece of the puzzle.  There are several proposed methods for delivering HDR content with some featuring a single stream and others suggesting a dual stream approach is better.  There are a number of organizations working on these standards now, including SMPTE, ITU, and the Blu Ray Disk Association.   Many broadcasters and manufacturers are also working on this and they include BBC, Dolby, NHK, Philips, RealD and Technicolor.  The UHD Alliance is also involved, which is a group of content creators, TV makers and semiconductor providers.

But distribution plans are already being made.  As noted above, over the top providers are moving forward with HDR distribution and the new Blu-ray spec will support HDR as well.  New Blu-ray players and content should start to flow by the end of 2015. Anyone in the distribution channel needs to be looking at how they will deliver HDR content.

What about HDR in some of the ProAV segments? First, it seems reasonable to assume that there will be increasing pull for HDR content as awareness of it grows and the image quality impact becomes more widely seen across many industries.  Consumer interest will impact professional interest.

Medical images can clearly benefit from HDR.  Rental and staging events will be more impactful with HDR content and displays.  Corporate boardrooms will always want the latest cutting edge technology.  Location based entertainment like theme parks are definitely interested in HDR for its impact.  If you are in an industry where advanced imaging and display technologies matter, HDR needs to be on your radar now.

The upcoming Display Summit event, a thought-leadership conference focusing on the latest advancement in the pixel pipeline, will feature HDR.  A symposium presentation and panel session will feature speakers from RealD, Philips, and Canon.  RealD will talk about 2D room environment and 3D encoding considerations for HDR, Philips will discuss the distribution standards and approaches, while Canon will discuss the production workflow for HDR.

In addition, Philips will demonstrate the difference between SDR and HDR content on two displays, while Canon will provide a live camera-to-monitor HDR demo for attendees.  To see the full agenda or speaker and demos, or to register, go to: www.displaysummit.com.