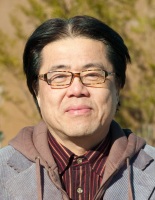 Martin Chien is an entrepreneur since the 1990s. Martin Chien received his B.S in Electronics Engineering from top engineer college in Taiwan and later pursued EMBA degree in the US. Before becoming an entrepreneur, he worked for major semiconductor engineering teams both in Japan and in Taiwan for more than a decade and eventually started his first automatic machine company where he had earned several patents and honors in the electronics industry. Starting from the 2000s, Mr. Chien shifted his focus to create products made with PVC, such as unsupported projection screen. Thereafter, he endeavored to innovate the quality of screen and explore its potential. After another decade of innovative effort, Mr. Chien recently made his breakthrough by inventing a revolutionary optical projection screen named MicroliteScreen which breaks the conventional physical limitation in screen gain-viewing angle trade off. In other words, this patented screen is so far the only projection screen that can perform high gain and full horizontal viewing angle simultaneously.

Microlitescreen is the only projection screen that can achieve high gain even at extreme horizontal viewing angle. Microlite screen uses lenticular layers including front and rear layers. Each individual microstructure is merely 5 um (micron) in diameter and Microlitescreen uses layers of lenses to achieve the widest horizontal viewing angle regardless of the amount of gains on the projection screen.

Microlitescreen consists of various layers of specialized material. Some layers are bound together to achieve this thin PET material. These layers include a lenticular layer on the front surface, a diffusion layer that diffuses the brightness, a second lenticular layer that enhances horizontal viewing angle, finally protective layers are added on the front and back to provide scratch-resistance.