The Next Wave Towards Unrestricted 3D

HoloVizio 3D light-field display technology uses a specially arranged array of projection optical modules combined with a holographic screen to reconstruct the complete 3D light field. With proper control, light beams leaving the points of the hologram screen propagate in various directions, as if they were physically emitted from the points of 3D objects, appearing either behind the screen, or floating in the front of it in the space.

Compared to VR/AR systems, light field displays are capable to give 3D experience with freedom, without headgear, or isolation, enabling shared scenarios without restricting the viewers to see, to interact with the 3D scenes. Light field technology is also a realistic alternative of true holographic displaying, even outperforming such systems in size, FOV, colors.  Behaving like a simplified hologram, it reconstructs only the lights necessary for a 3D view, removing redundancy and the need for extreme number of pixels.

The HoloVizio system, having an optical and control capacity in the order of ~100x number of pixels relative to conventional 3D displays, offers natural, restrictions-free 3D experience on a full 180 degrees FOV, enabling collaborative use for an unlimited number of viewers, even in a wider, immersive space for simulation, training, high-end visualization. As a scalable technology, the current display range goes from monitor-style units, up to cinema systems. 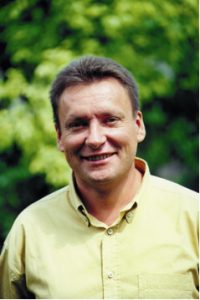 Tibor Balogh graduated as an electrical engineer at the Budapest Technical University and has extensive experience in the fields of holography, lasers, electro-optical technologies and engineering. Started his career in software engineering, then worked as an assistant professor at the Eötvös Loránd Scientific University – Budapest.

He was awarded the Joseph Petzval medal, the Kalmár award and the Dennis Gabor Prize for his work, was World Technology Award finalist in 2006, has several patents and publications. He is responsible for the overall management of Holografika, under his management the company was recognized Red Herring Top 100 Europe, WEF Technology Pioneer company, won several EU and national awards. He formulates the company’s business and R&D strategy, actively shaping developments in 3D technologies in the world.