Parallax-Free 360 Imaging and Its Implication on Light Field Capture

Parallax-Free 360 camera systems use an array of multiple adjacent cameras, the individual cameras having a polygonal shape, so that one camera can closely abut the next, and limit blind regions between cameras.  Each camera also captures unique image light from the scene without needing to also capture shared image content with the next camera over.   By minimizing image capture with image overlap, the problem of parallax error, where one camera sees an object in a scene being partially occluded by another object, and that camera sees the objects differently than does the next camera over, is likewise reduced.  Similarly, these camera systems also avoid the problem of double images and perspective errors, in which two cameras that are imaging a scene from different angles, see the same object differently.   As a result, parallax-free cameras can readily crop and seam images captured by adjacent cameras, without requiring time consuming image processing to find the seams, or to average the content to correct for parallax and perspective differences.

This new method for 360 capture has significant implications for the future of light field 360 capture. The technology aligns the entrance pupil of each camera to be nearly co-incident with neighboring cameras. Because the entrance pupils are highly correlated, there are no missing chunks of the lightfield that need to be interpolated by a computer, resulting today in time-intensive compute resources. The effect is the ability to create lightfield imagery for a given perspective in real-time instantly on demand. We will discuss several advantages and implications on machine learning for volumetric capture as well as the disadvantages to this approach. 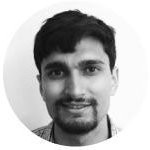 Zak Niazi has developed several optical innovations including the worlds thinnest scanning fiber endoscope for Harvard Medical School, and the first system to quantitatively assess aberrations in protective eyewear for UNSW in conjunction with the ISO. He is currently the CEO of Circle Optics, makers of the world’s first truly parallax-free 360 degree video camera.