Color in Next Generation MicroLED Microdisplays

For Augmented Reality (AR) to fulfill its enormous potential, the market demands highly mobile, untethered, discreet and stylish head mounted displays (HMDs) or “cooler glasses.”  But while sophisticated optical, diffractive or holographic waveguides can now superimpose a microdisplay image onto a user’s field of view, or an image can even be scanned directly onto a user’s retina, even with 3D effects, forming such micro-images bright enough in full color and high resolution remains a challenge. OLED microdisplays, the current default technology, are not nearly bright enough to efficiently render micro-images at high resolution and full color, viewable in bright daylight.

Emerging microLED technology, the same basic tech as LEDs in SSL but scaled down to very small, addressable pixels in a microdisplay, can be 1000 brighter than equivalent OLEDs. Several leading players and research institutions, are trying to rapidly assemble individual micro-die from separate epitaxial wafers (R,G,B), but the challenge, aside from integrating different material sets, is 100% placement – missing a sub-pixel in a microdisplay is unacceptable.  The approach is also impractical as sub-pixel sizes get smaller (<10 µm), limiting applications to smartphone or perhaps smartwatch displays, but not AR which ultimately requires sub-pixels << 10 µm. The better approach to make microdisplays wafer-scale, levering InGaN-based LED technology for efficient microLED arrays, and mate them to a CMOS switching backplane. The problem is that microLEDs are monochrome emitters (Blue/Violet) and for multiple reasons described, traditional methods of getting color with LEDs (e.g. Phosphors, QDs …) will not work as pixel sizes shrink <10 µm.

VerLASE will describe its Chromover™ technology for efficient color conversion, including for scanned laser approaches. A wafer scale, fully inorganic thin-film structure, it combines photoluminescent Quantum Wells (QWs) of proven semiconductor materials with a novel resonator that dramatically increases input light absorption for very high efficiency, directly down converting blue/violet light from low cost, widely available blue/violet LEDs, new microLED arrays or laser diodes to any designed color in the visible. A single chiplet can be made with multiple QWs, then pixelated to support multiple colors (RGB) for microLED microdisplays.  The output can also then be designed for spectrally narrower emission, and for a narrower cone angle, which becomes critically important as the diffractive or holographic waveguide optics used in the advanced AR architectures being adopted by the leading players are very sensitive to the input angles and spectral width of the underlying source light. 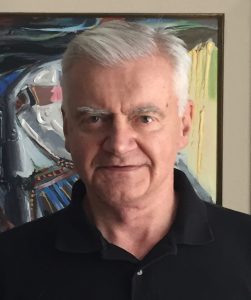 George Powch has successfully led previous tech companies, taking innovation from the lab into manufacturing and worldwide sales & distribution. The former President/CEO of Huber+Suhner North America, responsible for multiple units of a Swiss parent, he started as a R&D engineer at HP, rose at Bendix Corp. to head the Robotics Division, then became President of Diffracto Ltd in Canada, taking it public on the TSE in 1985.  He was President of BFI-Ibexsa, a European distribution group sold to Avnet Corp in the early 90’s.  An active angel investor in several tech ventures, including Versatilis, VersufleX Technologies and Frontier Nanosystems, he has a BS from MIT in EE, an MS from Stanford in EE, and an MBA from Harvard Business School.