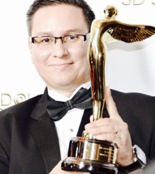 Inventor of the Stereoscopic 2D+Delta codec in 2003. IP Patent statements submitted and listed on the MVC ISO Standard 14496-10 in 2007. In December 2009 The MVC standard was selected by the BDA as the official 3D Blu-ray spec.

First in the world to show a compatible full HD 3D Blu-ray in 2007.

Inventor of the Dynamic Convergence Algorithm for CG in 2004 now used in some S3D Videogames.

Designer of the TDVisor, a Head Mounted Display HMD in 2003, and the first full HD 3D stereoscopic HMD in 2007.

Designer of the TDVCam in 2003 and the first Full HD S3D digital camcoder in 2007.
Holder of many patents and copyright titles worldwide.

Architect of all the Firmware, Hardware and Software of all TDV products and applications.

The application of VR to education could yield to an eventual acceleration in the learning process across multiple disciplines like Medicine, Genomics, Nanotechnology, Architecture, Mechanical Engineering, Physics and many others through the use of VR 360 datasets. How can VR  accelerate our Cognitive Evolution? Where will all this yield to?